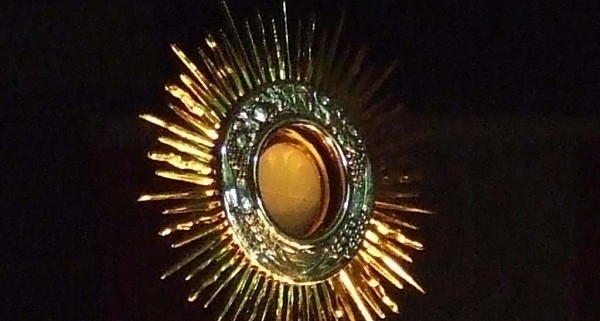 The congregation, led by the choir, sings a number of short hymns

A Marian hymn sometimes known as Hail Holy Queen. This hymn is followed by a Collect.

This hymn is composed by St. Thomas Aquinas and refers to Christ as the Saving Victim.

Then follows the Collect for Corpus Christi, which is also the Second Collect for Maundy Thursday in the Prayer Book.

The Celebrant guides us through a series Praises.

The Celebrant processes to the tabernacle, from which he removes a luna containing a consecrated host, which is the Body of Christ. The luna is placed into a Monstrance. The celebrant, protected by a humeral veil, transports the Monstrance to the chancel steps with the other servers and Ministers. The Celebrant there makes the Sign of the Cross with the Monstrance over the congregation while the Bells are rung and the Thurifer censes the Monstrance.

As the Celebrant and servers recess to the Santuary, the Choir sings Psalm 117 with an Antiphon added to the beginning and the end; This concludes the devotion and the service of evensong.